Top 10 places to visit in Haridwar 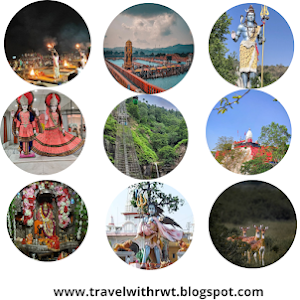 Are you a person who enjoys spirituality? Do you feel the presence of God or enjoy the peace that comes after walking around the temple? Well, we have found the best tourist places in Haridwar for you. which will make you feel a different peace.

Haridwar is known as one of the seven holiest cities in India. This city is of spirituality, but not only that! For nature lovers too, it is no less than a paradise.

You can plan a trip for your parents and family. in this blog, I will share with you the Top 10 Places to Visit in Haridwar so let's start.

Haridwar is a holy and religious city and a major pilgrimage center for Hindus in the Haridwar district of Uttarakhand. Haridwar famous place every day thousands of devotees come here.

It is also called Har ki Pauri, which basically means “Footsteps of God.” This is very holy for Hindus. Where Maa Ganga emerges from the Himalayas and touches the plains on its way.

Tourists and devotees visit this holy ghat early in the morning to take a holy dip. Because according to the Hindu religion, whoever takes a dip in the water of the Ganges, their sins and faults are erased. Here every evening Ma Ganga aarti takes place, during the Aarti.

It is mesmerizing to see the whole ghat lit up with the twinkling lights of three-tiered lamps of fire in the hands of the priests.

Devotees float thousands of Lamps on the surface of the water giving the river Ganges a supernatural aura of beauty. Floating Lamps are lit during the night, which in itself gives a different experience, whenever you go to Har Ki Pauri then you must attend the evening Ganga aarti Haridwar.

There are so many holy temples in Uttarakhand. The temple of Maa Mansa Devi Haridwar is very famous.


Goddess Mansa is recognized in the Puranas as the daughter of Lord Shiva. Maa Mansa Devi is considered the sister of Vasuki, the king of serpents.

Devi is situated at a distance of 3 km from Haridwar on the Bilwa Mountain in the Shivalik mountain range. There is a huge crowd of devotees in the month of Navratri. Maa Mansa Devi fulfills the wishes of her devotees here.

There are 2 idols of the Ma in this temple, out of which one idol has five arms and one face, while the other idol has 8 arms. The temple of Mata is considered to be one of the 53 Shaktipeeths.

As the mother's name Mansa means the wish of the mind, the idol of Mamta, Mansa Devi fulfills all the wishes of her devotees.

How To Reach Temple

Ma Mansa Devi Temple to go to the temple, you have to climb 786 steps. The temple is open from 5 in the morning to 9 at the night.

Ma Chandi Devi Temple is a famous temple located in the holy city of Haridwar in the state of Uttarakhand, dedicated to Goddess Chandi Devi temple Haridwar.

Temple was built in 1929 by Suchat Singh, the King of Kashmir during his reign but the main idol of Chandi Devi located in the temple was established in the 8th century by Adi Shankaracharya, one of the greatest priests of Hinduism.

According to mythology, a long time ago demons named Shumbha and Nishumbha had captured the kingdom of Indra, the God of heaven, and gave the gods out of heaven. After deep prayer by the gods, Goddess Parvati assumed the form of Chandi. and appeared before the demons. Shumbha was surprised to see the beauty of the goddess and Shumbha expressed his desire to marry her.

Which the goddess refused. Shumbha got angry, he was very proud of his powers, then he sent two of his chief demons Chand and Munda to fight with Goddess Parvati.

The goddess took the form of a powerful goddess Chandika to slay the demons and Chanda and Munda were killed by Goddess Chamunda. Then Shumbha and Nishumbha together tried to kill Chandika, but both the demons were also killed at the hands of the goddess.

After this Chandika took a rest for a while on the Neel Parvat. It is believed that a temple was later built at this place. Apart from this, two peaks located in the mountain range are called Shumbh and Nishumbh.

During special festivals like Chandi Chaudas Navaratri and Kumbh Mela in Haridwar, many thousands of devotees visit this temple to fulfill their wishes. Pilgrims coming to Haridwar must visit this temple once.

Anjana's temple is situated near Mansa Devi temple, which was the mother of Hanuman Ji. All the devotees who come to Chandi temple definitely visit this temple. There is also a Nilkeshwar temple at the base of Neel Parvat.

How to Reach the temple

A small hike from a bridge on Haridwar- Nazimabad Road leads to this temple.

Temple is located on a hilltop and gives majestic views of Haridwar city.

Sapta Rishi Ashram is a place in Haridwar where the Sapta Rishis did penance. It is believed that the Sapta Rishis did a lot of penance when the Ganges was coming flowing. All of them were completely absorbed in penance. When the Holly Ganga River was flowing, the Ganges did not disturb the penance of the sages and itself divided into 7 parts and changed its course. This is the reason why it is also called Sapta Dhara.

According to a Hindu folktale, this ashram of the Sapta Rishis Ashram Haridwar was a place of worship. The seven sages of the Vedic period were Kashyapa, Atri, Vasishtha, Jamadagni, Vishwamitra, and Bharadwaja. Sapta Dhara is also known as Sapta Sagar. This place is also called Sapta Sarovar or Rishi Kund. It is also said that these seven streams into which the Ganges was divided, which together form the Nile stream. Together they look very beautiful, which are called Neel Dhara.

If you are in Haridwar or you are preparing to go, you must visit this place.

If you want to go to Rishikesh from Haridwar it's not very far from Haridwar.  It's only around 25 kilometers (15.5 miles) from Haridwar to the Best places to visit in Rishikesh in Uttarkhand, so most people choose to visit and explore Mother nature's beauty in both places.  This is ideal because both are very different in nature and offer unique spiritual experiences.

You must visit this place majestic Bharat Mata Mandir in Haridwar is dedicated to India as a country and thereby gets its name from its purpose. The late Indian Prime Minister Indira Gandhi inaugurated the Bharat Mata Temple in 1983. The temple stands at a height of 180 feet and has a total of 8 floors with a specific theme.

Those who visit Haridwar also visit here. This temple is not a temple that worships gods or has any religious inclination, but one that stands for the many freedom fighters and patriots of the Indian Struggle for Independence.

The multi-story temple situated in Sapt Sarovar is not a majestic temple Bharat Mata Mandir also celebrates the matchless trait of India and its immense culture. The oneness of the country and its diversity are also a few aspects that the Bharat Mata Mandir brings to our attention.

This temple is around 5 kilometers on the outskirts of Haridwar city and 25 kilometers from the Jolly Grant Airport of Dehradun.

Pawan Dham Haridwar This temple made of glass is famous all over India for its beauty. The carving of this temple has been done with glass in such a way that the same idol is seen many times, here it has been decorated with beautiful tableaux of Hindu deities.

You will feel peace in this place, people often come to this ambush for meditation and peace of mind. You should also visit this place once.

Bada Bazaar in Haridwar is a busy market full of religious trinkets and other goods for locals as well as foreign tourists visiting the holy city in large numbers. This market is mainly famous for the purchase of Rudraksha and Ayurvedic medicines. Here you are also popular among travelers for wooden items and handicrafts.

You will also have the privilege of eating delicious, delicious native pedas here. When these pede melt in your mouth, you will wow! Can't live without doing it. You will also find religious jewelry here; you should come to this market if you come for worship or any other Come to Haridwar tourist places for religious work.

Places to see in Haridwar in this list Swami Vivekanand Park is a must-visit place. Park Located near Har ki Pauri, this amusement park is very delightful. Here you will find a long lawn of green grass and a sheet of flowers spreads its beauty which looks very beautiful and it has been made in the shape of a triangle.

Where the grand statue of Swami Vivekananda is installed and there is also a very beautiful statue of Lord Shiva which is also there. Visible from afar. Travelers also come here to see the beautiful view of Har Ki Pauri, to have picnics, etc., and to spend a relaxing moment with their family.

You will also see people walking here in the morning and evening. And the evening in this park feels a different peace. You must also visit this place once if you come to Haridwar.

Daksha Mahadev Temple is an old temple and it is very beautiful, many people come here. The temple is dedicated to Lord Shiva. It is located about 4 km from Haridwar. This temple was first constructed by Rani Dhankaur in the year 1810 and it was rebuilt in 1962. According to the legend, Daksha Yagya was performed at this place.

According to mythological stories, when this Yagya was organized by Daksha Prajapati, the father of Goddess Ma Sati. He invited everyone except his son-in-law Lord Shiva to this yagya. Due to such behavior of her father, Sati felt herself very humiliated and sacrificed her life in the holy fire of Yagya. There is a small pit in this temple and it is believed that this is the place where Goddess Sati sacrificed her life.

The idol of Lord Shiva is placed in the middle of the temple in the Shivling form. Every year in the Hindu month of Sawan, devotees come here in large numbers to offer prayers.

is. Talking about, the best time for you is between November and March because the weather is cool and pleasant when you are exploring the place.

If you are traveling as a pilgrim, the months of July and October are the best time to visit Haridwar for you. You can also experience some of its religious fervor between March and May.

If you just want to explore the place and are planning to go there just for a vacation, then the best time to visit Haridwar is between October and February. The weather is wonderful and the crowds have reduced a bit.

Whether you are spiritually inclined or not, Haridwar is a beautiful destination for holidays. Irrespective of what season you decide to visit Haridwar, we are sure that you will have an amazing time.

Thanks for visiting I hope this Top 10 Places to Visit in Haridwar blog helps you to know more about the places to see in Haridwar. Please keep visiting.

Popular posts from this blog